If you’ve ever wondered what the difference between an ice fishing reel and a spinning reel is, you’re not alone. After all, they look the same and seem to work the same way.

The differences between ice reels and summer spinning reels are small but important. First, ice reels are usually smaller because they aren’t made to cast and retrieve a lot of line. Second, ice fishing reels often have fewer friction-reducing ball bearings. Third, ice reels are designed to hold up in colder temperatures.

This article will break down the basics to help you decide if you can get away with using a summer reel or if you need to invest in more ice fishing-specific gear.

What is an Ice Fishing Reel?

Note: This answer refers only to spinning reels, the most common design for ice fishing. Other reels, such as in-line reels, work differently. 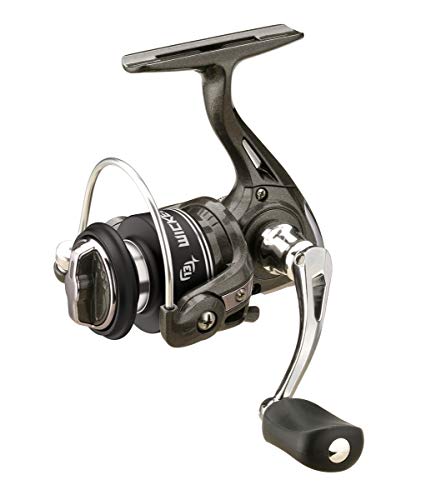 An ice fishing reel, like all spinning reels, is designed with a crank handle on one side. Usually, the reel is either right- or left-handed, but some allow you to install the handle on either side of the spool.

Spinning reels have gears inside that convert each 360-degree turn of the handle into several rotations of the spool, which is what allows you to reel the line up quickly.

The speed at which this happens is called the gear ratio, and ice fishing reels usually have a gear ratio between 5.2:1 and 6.2:1. Every complete rotation of the crank handle drives 5.2 or 6.2 rotations of the spool.

Ice fishing reels are always made with lubricants that work in very low temperatures.

Ice reels also work best with certain kinds of line: monofilament, fluorocarbon, or similar materials are standard for ice. Braid line or any other type of line that holds moisture is likely to freeze up.

What is a Spinning Reel? 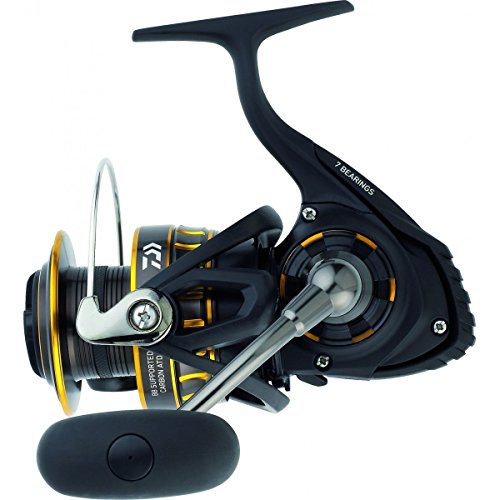 Similarly, regular spinning reels are designed with a crank handle on one side. Usually, the reel is either right- or left-handed, but some of them will let you install the handle on either side of the spool.

They are sold in all different sizes and the most common ones for lake fishing are medium size (3,000-5,500).

Spinning reels have gears inside that convert each 360-degree turn of the handle into several rotations of the spool, which is what allows you to reel the line up quickly.

The speed at which this happens is called the gear ratio, and spinning reels are available with a range of different ratios. If you use a spinning reel with a gear ratio of 5.2:1, this means that every complete rotation of the crank handle drives 5.2 rotations of the spool.

It’s common to find gear ratios between roughly 5:1 and 6:1, but some manufacturers offer 4:1 or 7:1 gear ratios. These are usually for more advanced anglers that desire a slow or fast retrieve for specific purposes.

Spinning reels have ball bearings and lubricants and that may or may not work well in very cold temperatures.

Regular spinning reels can accommodate any type of line: monofilament, fluorocarbon, braid, or others. These all work fine in ordinary temperatures, but braid line and other types that hold moisture can freeze in the cold.

Side By Side Comparisons: Breaking it Down

1/ When to Use an Ice Reel vs. a Spinning Reel

An ice fishing reel is made specifically for ice fishing. Fishing through the ice, you don’t need to cast the line anywhere. You just drop it down the hole. This makes the very small size of the average ice reel large enough for what you need.

The average spinning reel is a little bigger and bulkier. Although an ice reel is technically a spinning reel, the ice reel is usually small. Spinning reels hold more lines and are a bit stronger to accommodate casting your bait out quite a distance and retrieving it often.

For light fishing, the rods are basically interchangeable, but you need a long rod for casting and a short rod for ice fishing.

An ice fishing reel and rod can actually be useful for one type of summer fishing, and that is true jigging. This is done from a kayak or a pier and involves no casting and little retrieving. Just dip the jig straight down in the water to catch fish below you.

Note that braid and other types of absorbent fishing line will freeze up in cold temperatures, so if you are using a normal spinning reel for ice fishing, it needs to have hard-line like monofilament or fluorocarbon.

An ice fishing reel and a typical spinning reel are very similar. They both translate a single rotation of a crank handle into several rotations of the fishing line spool. In theory, either can be used for casting or jigging in an ice hole.

Most of the functional difference comes from how long of a fishing rod the reel is attached to. Casting requires a longer rod, while a shorter rod is easier for ice fishing.

Size also makes a difference: typically, a larger spool with more line is better for casting while the more controlled conditions of ice fishing allow for a smaller reel to be used.

There is not necessarily a big price difference between an ice fishing reel and a regular spinning reel. The price gap depends mostly on the quality of the reel that you decide to buy. You can find new rod-and-reel combos in either variety ranging from just a few dollars to hundreds of dollars.

If you are trying to get the most bang for your buck, you may want to buy only one reel. In that case, a regular spinning reel in the 2,000-3,500 size should be adequate for most casting without being too big for ice fishing.

If you buy a spinning reel that can pull double duty, you will only need to install it on a shorter ice rod when the seasons change. This can save you some money and space without buying multiple reels.

Spinning reels and spinning ice reels can be difficult to use, especially for younger anglers that have small hands. They are well known for tangling the line if you don’t use them properly.

If you struggle with spinning reels, you may prefer to use an in-line ice fishing reel . They are a little simpler to operate and the line comes off the spool in a straight line, which prevents tangles.

Spinning reels are larger and may have more ball bearings to make retrieving line easier. They aren’t always made for extremely cold temperatures, so it’s best to check the ratings before using a spinning reel in the wintertime or to invest in a specialized ice fishing reel.

Now that you’ve learned the similarities and differences between these two types of reels, you’re ready to choose your setup and start catching. Good luck on the lake!